Abstract
Aims This study aimed to assess the ability of a voice analysis application to discriminate between wet and dry states in chronic heartfailure (CHF) patients undergoing regular scheduled haemodialysis treatment due to volume overload as a result
of their chronic renalfailure.

Methods and results
In this single-centre, observational study, five patients with CHF, peripheral oedema of ≥2, and pulmo-nary congestion-related dyspnoea, undergoing haemodialysis three times per week, recorded five sentences into a standard smartphone/ tablet before and after haemodialysis. Recordings were provided that same noon/early evening and the next morning and evening. Patient weight was measured at the hospital before and after each haemodialysis session. Recordings were analysed by a smartphone application (app) algorithm, to compare speech measures (SMs) of utterances collected over time. On average, patients provided recordings throughout 25.8 ± 3.9 dialysis treatment cycles, resulting in a total of 472 recordings. Weight changes of 1.95 ± 0.64 kg were documented during cycles. Median baseline SM prior to dialysis was 0.87 ± 0.17, and rose to 1.07 ± 0.15following the end of the dialysis session, at noon (P = 0.0355), and remained at a similar level until thefollowing morning (P = 0.007). By the evening of the dayfollowing dialysis, SMs returned to baseline levels (0.88 ± 0.19). Changes in patient weight immediately after dialysis positively correlated with SM changes, with the strongest correlation measured the evening of the dialysis day [slope: -0.40 ± 0.15 (95% confidence interval: -0.71 to -0.10), P = 0.0096].

Conclusions
The fluid-controlled haemodialysis model demonstrated the ability of the app algorithm to identify cyclic
changes in SMs, which reflected bodily fluid levels. The voice analysis platform bears considerable potential as a harbinger of impending fluid overload in a range of clinical scenarios, which will enhance monitoring and triage efforts, ultimately opti-mizing remote CHF management.

Introduction
Heartfailure (HF) can emerge either rapidly or gradually, with minimal or subtle symptomatic eruption in either case before critical decompensation. Evenfrequent and routine assessments oftenfail to predict or alert on imminent fluid overload. New technologies developed to tighten surveillance of pulmonary fluid status include the implantable, wireless pulmonary artery pressure and heart rate monitoring CardioMEMS™ System, indicatedfor patients with New York Heart Association (NYHA) Class III HF with a recent history of hospitalization,1 and intrathoracic impedance-based assess-ment devices.2,3 These technologies though are invasive and generally reservedfor those with severe Class III HF and who have recently been hospitalized. Non-invasive telemedi-cine platforms, which involve synchronous and asynchronous transfer of measured or self-reported parameters (e.g. elec-trocardiogram, blood pressure, body weight, and heart rate), have had conflicting impacts on HF patient care, monitoring, and management, with some reports of no change in all-cause mortality4 or all-cause readmission rates.5,6 Recent advances in voice and sound analysis algorithms have raised
awarenessfor the potential clinical beneﬁts of non-invasively distinguishing speechfeatures in disease settings. Such classifiers have been shown to successfully iden-tify patients sufferingfrom depression, pneumonia–asthma, coronary artery disease, and autism spectrum disorder.7–11 In line with these applications, altered phonation patterns were detected in the context of pulmonary congestion, likely arisingfrom the reduced viscosity of hyperhydrated vocalfold tissue and its consequentially atypical vibration mechanics. Murton et al.12 report on measurable acoustic speech markers indicative of HF status in patients with acute heartfailure (AHF).
The current study exploited the well-controlled volume status in patients with HF undergoing chronic haemodialysis treatments tofurther assess the capacity of the app-based al-gorithm to discriminate significant volume shifts.fluid re-moval leads to lower circulating volume and cardiac fllling pressure after each haemodialysis session, which isfollowed by gradual increases in fluid volume until maximizing just be-fore the next haemodialysis session. Therefore, such patients present a ‘clinical model’for the assessment of the sensitivity of vocal analysis in detecting changes in fluid status. Accord-ingly, fluid status-identifying speech measures (SMs) were analysedfrom voice recordings collected over the course of fluid management with haemodialysis of five patients with chronic HF and haemodialysis-dependent chronic renal failure.

Methods
Patients and study design
This single-centre, observational, single-arm study was approved by the ethics committee of Hadassah Medical Center, Jerusalem, Israel. Adult (>18 years) patients with acute and chronic Class C, NYHA Classes II-IV, congestive HF, undergoing haemodialysis 2-3 times weekly, with a fluid overload of 2-4 L above their currently known dry weight, peripheral oedema of ≥2, and pulmonary congestion-related dyspnoea were eligible to par-ticipate in the study. Patients with significant chronic obstructive pulmonary disease, a congenital heart disease, ev-idence of an active infection or restrictive cardiomyopathy, or constrictive pericarditis were not eligible to participate in the study. Signed informed consent was obtainedfrom each participant. Patients undergoing routine haemodialysis treatment were asked to record five sentences, in their native language (Hebrew or Arabic) into a standard smartphone 3-4 times immediately before (wet state) dialysis. They were then asked to record the sentences an additionalfour times at home: 2-3 hfollowing haemodialysis end (noon/early evening) in the late evening/before bed time, in the morningfollowing dialysis, and before breakfast, and in evening of the dayfollowing dialysis. The duration of each recording was 2-5 s. Patient weight before and after dialysis was recorded to determine the volume of fluid removed during each cycle. Each patient was monitored over multi-dialysis cycles.

Speech analysis application
The HearO™ voice capturing application (Cordio Medical Ltd., Or Yehuda, Israel) runs on a standard smartphone/tablet, and transmits data to an analysis software which executes on a server in the cloud. The analysis algorithm compares SMs between utterances collected at a baseline state and different points of interest. In this study, baseline is the pre-dialysis SM and different points of interest are the post-dialysis SMs (Supporting Information).

Speech analysis
The generation of speech sounds can be modelled as the passage of an excitation signal, originatingfrom the lungs, through a linear ﬁlter. The ﬁlter represents the shape of the vocal tract, which includes the air pathwaysfrom the glottis upwards to the lips and nostrils.
Speech measure represents the dissimilarity (larger values mean greater dissimilarity) between patient utterances of a reference set R, when the patient was at a baseline physio-logical state, and a test set T, obtained later when the pa-tient’s state may have changed. The method is based on a similarity measure D(t,r) between a test and reference utter-ances, which is a weighted sum of short-term spectral (transformed ﬁlter) distortions between non-linear alignedframes in the test and the reference utterances. The SM canformally be defined as
SM (T, R) = medianr ? RD(t, r):
That is,for each test utterances, the similarity measures are computed relative to every one of the reference utter-ances and the median distortion is presented as the representative distortion. The SM between the repeated utterances within each class measures intra-class variability, whereas the SM between the test and the reference classes measures inter-class variability. Thus, if SM(T,R) is signifi-cantly larger than SM(R,R), this indicates a difference be-tween the underlying physiological conditions. 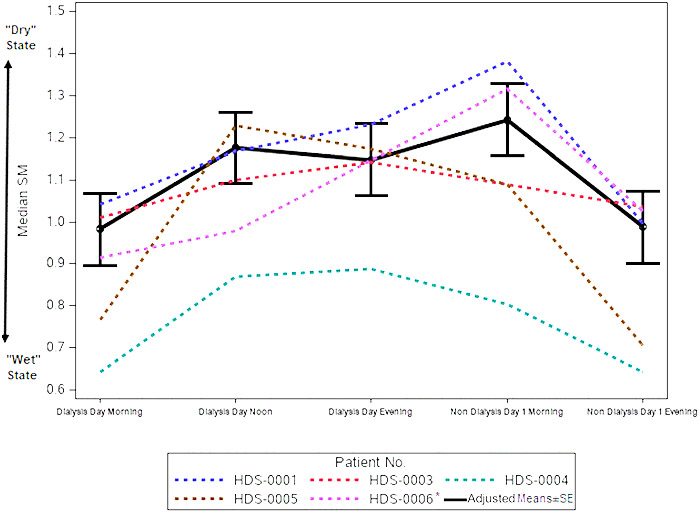 Discussion
The present study utilized a highly accessible clinical model to assess the ability of a sound-based algorithm to distinguish between wet and dry states in patients with AHF undergoing haemodialysis. The voice analysis platform identified signiﬁcant changes in SMs, which paralleled the cyclic haemodialysis treatment-removal fluid patterns. Specifically, pre-dialysis SMs were distinct from those of recordings col-lected immediately after or the morning following treatment. These differences waned with gradual systemic fluid accumu-lation as patients progressed towards their next treatment session. A deviation from this cyclic pattern was consistently noted on the evening of haemodialysis, which may be related to the patients being in their minimal fluid overload on the day of the haemodialysis itself.13 The potential of SMs to inform on pathophysiological states is likely rooted in the hydration-sensitive viscoelastic proper-ties and associated oscillatory behaviour of the vocal fold tis-sue and in respiratory muscle biomechanics. Well-known clinical examples of fluid state-related voice changes include the characteristically deep and hoarse voice of patients with Reinke’s oedema, a condition in which fluid accumulates be-low the outer layer of the vocal cords, subsequently reducing their vibration frequency.14 Similarly, bronchophony, whis-pered pectoriloquy, and egophony15 are common presenta-tions of alveolar or interstitial space fluid overload. Aligning with these are the reports on the negative fluid balance effect of haemodialysis on vocal acoustics parameters,16-19 respira-tory muscle strength and endurance,20 and total lung capacity,21,22 all with bearings on phonation aerodynamics. These effects resonate with the commonly reported transient (≤24 h) post-dialysis hoarseness,23,24 shown to correlate with decreased vocal fold thickness.25 Indeed, in a previous study assessing voice recordings of patients with AHF at hospital ad-mission and at discharge, HearO discriminated between re-cordings collected at admission and those collected at discharge, following intense diuretic treatment and reduction of extracellular fluid. In the current controlled AHF model, the algorithm immediately translated the reduced systemic fluid overload achieved with haemodialysis into discriminating SMs extractable from simple voice recordings. In the context of the increasing attention being placed on remote access technologies of transitional care programmes, this algorithm promises to serve as a valuable monitoring and triage tools in HF management protocols. Such an addition to the expanding alternatives to traditional in-person follow-up visits is expected to advance the global efforts towards opti-mized HF healthcare response and patient care. Several limitations of the current study should be noted. The study tested a small cohort of patients and was a sin-gle-centre, open-label study. In addition, patients with HF on dialysis treatment do not necessarily represent the classi-cal worsening pattern of HF. Nevertheless, as in this unique model, each patient had multiple and separate dialysis cycles, and the data analysed here actually represent a larger cohort. Further studies will be needed to assess the performance of the voice analysis algorithm in larger cohorts of HF patients under less rigorous clinical surveillance. In conclusion, this unique clinical model of patients with HF undergoing haemodialysis assisted in the validation of this smartphone app algorithm and its ability to deploy sophisticated vocal analysis to determine the pulmonary hydration status of pa-tients with Hfl

Funding
This work was supported by Cordio Medical Ltd.